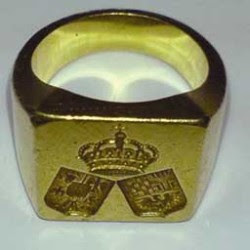 The ring of Queen Maria Karadjordjevic, part of the Karadjordjevic family’s valuable jewellry collection, was exhibited in the Foundation of King Peter I in Oplenac.

The golden ring was purchased from a private collectionar by the Municipality of Topola, following the initiative from the Foundation. The handing over ceremony took place in the King Peter’s Galery in Oplenac.

Maria of Romania (6 January 1900 - 22 June 1961) was queen consort to King Alexander I of Yugoslavia. Her titles included HM Queen Maria of Yugoslavia (1929-1945), HM The Queen of Serbs, Croats, and Slovenes (1922-1929) and HRH Princess Maria of Romania (1900-1922). She was born in Gotha, Thuringia in Germany, during the reign of her maternal grandfather Duke Alfred of Saxe-Coburg and Gotha, and during the Romanian reign of her granduncle King Carol I. She was known as "Mignon" in the family to distinguish her from her mother, Princess Marie, a daughter of Prince Alfred, Duke of Edinburgh, a son of Queen Victoria. Her maternal great-grandfather was Tsar Alexander II of Russia. Marie's father was Crown Prince Ferdinand of Romania.

She married King Alexander I of the Kingdom of Serbs, Croats and Slovenes on 8 June 1922, and raised three sons. Following the assassination of King Alexander in Marseilles in 1934, she became Queen Mother of Yugoslavia and her oldest son became Peter II of Yugoslavia, the last Yugoslav king.

Maria was well educated, spoke several languages fluently and enjoyed painting and sculpting. She also drove a car by herself, which was very unusual at the time. Well loved and respected by the people of Yugoslavia, she continues to be well thought of and remains, in the eyes of the Serbian people, one of the greatest humanitarian patron's of the Balkan region. Streets are named in her memory, such as "Ulica kraljice Marije" or "Queen Marija Street", and numerous schools and other organizations still carry her name.

Marie died in exile in London on 22 June 1961 and is interred at the Royal Burial Ground at Frogmore, which adjoins Windsor Castle. 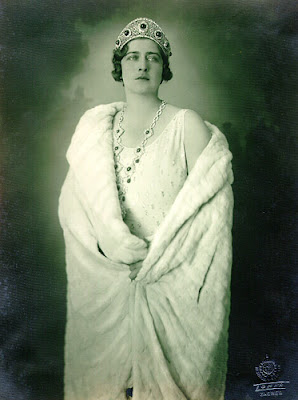